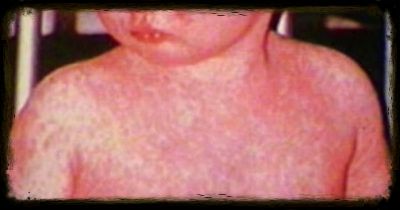 Measles is an infectious viral disease that occurs most often in the late winter and spring. It begins with a fever that lasts for a couple of days, followed by a cough, runny nose, and conjunctivitis (pink eye). A rash starts on the face and upper neck, spreads down the back and trunk, then extends to the arms and hands, as well as the legs and feet. After about five days, the rash fades the same order it appeared.

How can I catch measles?

Measles is highly contagious. Infected people are usually contagious from about 4 days before their rash starts to 4 days afterwards. The measles virus resides in the mucus in the nose and throat of infected people. When they sneeze or cough, droplets spray into the air and the droplets remain active and contagious on infected surfaces for up to two hours..

How serious is the disease?

Measles itself is unpleasant, but the complications are dangerous. Six to 20 percent of the people who get the disease will get an ear infection, diarrhea, or even pneumonia. One out of 1000 people with measles will develop inflammation of the brain, and about one out of 1000 will die.

Before the measles vaccine became available, there were approximately 450,000 measles cases and an average of 450 measles-associated deaths were reported each year. Widespread use of measles vaccine has led to a greater than 99% reduction in measles cases in the U.S. compared with the pre-vaccine era.

However, measles is common in other countries where it spreads rapidly and can be easily brought into the U.S. If vaccinations were stopped, measles would return to pre-vaccine levels in the U.S. and hundreds of people would die from measles-related illnesses.

Why measles is still a problem in the United States​​​​​​​?

We still see measles among visitors to the U.S. and among U.S. travelers returning from other countries. The measles viruses travelers bring into the U.S, sometimes cause outbreaks.  Measles continues to be a problem in developing countries with low vaccination rates.  With the frequency of travel to and from the US and immigration, due to the highly contagious nature of this virus, measles spreads in areas where vaccination rates are lower than 90-95%.

Measles vaccination in the U.S. has decreased the number of cases to the lowest point ever reported. Widespread use of the measles vaccine has led to a greater than 99% reduction in measles cases.

If the chance of the diseases is so low, why do I need the vaccine?

It is true that vaccination has enabled us to reduce measles and most other vaccine-preventable diseases to very low levels in the United States. However, measles is still very common — even epidemic — in other parts of the world. Visitors to our country and U.S. travelers returning from other countries can unknowingly bring this disease into the United States, and if we are not protected by vaccinations, it quickly spreads, causing an epidemic.

What kind of vaccine is given to prevent measles?

The MMR vaccine prevents measles and two other viral diseases — mumps and rubella. These three vaccines are safely given together. MMR is an attenuated (weakened) live virus vaccine. This means that after injection, the virus grows, and causes a harmless infection in the vaccinated person with very few, if any symptoms. The person's immune system fights the infection caused by these weakened viruses and immunity develops which lasts throughout that person’s life.

How effective is MMR vaccine?

More than 95% of the people who receive a single dose of MMR will develop immunity to all three viruses. A second gives immunity to almost all of those who did not respond to the first dose​​​​​​​

How Healthy Are We?

The Vaccines for Children (VFC) Program helps provide vaccines to children whose parents or guardians may not be able to afford them. This helps ensure that all children have a better chance of getting their recommended vaccinations on schedule. Vaccines available through the VFC Program are those recommended by the Advisory Committee on Immunization Practices (ACIP). These vaccines protect babies, young children, and adolescents from 16 diseases.